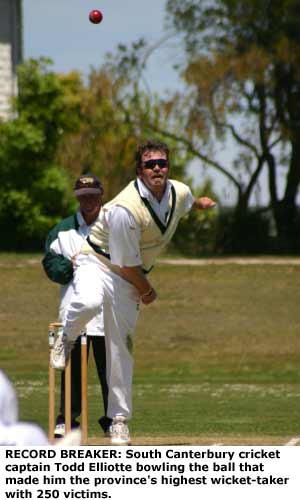 Off-spinner Todd Elliotte has etched his name into the record books by eclipsing Phil d’Auvergne as South Canterbury cricket’shighest wicket-taker.

The 32-year-old Elliotte took two wickets yesterday against MidCanterbury at the Aorangi Bowl to move his tally to 251.

The moment the umpire’s finger went up Elliotte’s team-materushed to congratulate him.

His outstanding feat of moving ahead of d’Auvergne was by no means an easy one.

Since then apart from a year teaching English in Korea Elliotte has been a stalwart of the South Canterbury side also captaining them for almost the past decade.

His best efforts was grabbing 11 wickets against Mid Canterbury last year and has several 10 wicket bags.

Elliotte has however never managed to grab a hat-trick although has had a couple of attempts.

The off spinner said he wasn’t really one for keeping records but read an article in the Herald a couple of seasons ago saying he had a chance of breaking the record.

“Since then I just kept a note wondering if I would get there, so it’s great.”

Elliotte was also rapt that wife Vickie and one-year-old son Harry were also able to be there to celebrate the achievement along with his parents, Keith and Ethel.

With one milestone achieved Elliotte is unsure whether he will return next year to fulfil another as he will finish this season just short of 100 games for South Canterbury.

“I love the game but with a young family priorities change but I guess you never say never.”

Elliotte has not only been successful with the ball he has also proved handy with the bat at times for the province with a top score of 123 against Canterbury Country.

His highlight however was the 2000 season which culminated in South Canterbury hoisting the Hawke Cup.

“We had it all, the right team, management and coach, especially the fact I think the same 13 or 14 players went through the season.”

Elliotte said he had always enjoyed cricket because of the people he played with.

“When I was first picked for South Canterbury guys like Bruce Carlaw and Dave Fisher made me welcome and treated Craig, Parks and myself as valued team members.

“Since then guys like Andrew Buckingham and Grant Brookland and lots more are all great guys and great to play with, and there lots of others.”

Elliotte will get a chance to extend his record when the Hawke Cup starts in a fortnight.