SOUTH CANTERBURY hosted Hanan Districts neighbours North Otago at the weekend in the first cricket match to be played between the provinces in more than 10 seasons, even though North Otago are one of South Canterbury’s closest neighbours.

Since the Hawke Cup was re-formatted some years back, the two associations generally only have contact in age-group cricket.

This match, played at Aorangi Oval, provided an ideal chance to cement more pre-Hawke Cup season matches on a regular basis for both teams, especially now that Christchurch Suburban may no longer have a competition next season as they move back fully under the Canterbury umbrella.

North Otago won the toss and then set the game up with a solid first wicket partnership of 120 from 27 overs between James Cutt (45) and Duncan Drew who batted superbly, especially when driving down the ground or through the covers on his way to the game high score of 72 before he was bowled by Craig Davies.

SC then got back into the game as captain Todd Elliotte decided to take the pace off the ball, introducing more spin with Ben Millar cleaning up the middle order with 4-39 while Davies and Elliotte both grabbed two wickets each.

The medium pacers and quicks toiled away mostly for no reward as Elliotte used nine different bowlers, but a late flurry by Glen Paterson (47) helped North Otago post a very defendable 220-9 from 50 overs. 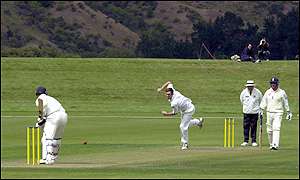 Former New Zealand opening bowler David Sewell has lost little pace and may have improved his accuracy as he kept the South Canterbury scoring to a minimum, but was unrewarded despite conceding only 19 runs from his 10 overs.

Fellow left-armer Paul O’Dell with 2-25 kept the pressure on, but once again it was the spin of Jordan Horrell that had the most success as he took 3-47.

South Canterbury were always behind as they regularly lost wickets and couldn’t build partnerships.

Despite having to bat with a runner after injuring his foot, James Laming was the best of the SC batsmen with 39, but every time things were on the improve a wicket fell.

Luke Taylor was out just as he was getting on top of the bowlers for 24, and by the time Jordan Morrow (22) and Kevin Teahen (31), batting nine and 10 respectively, got together, their 49-run partnership for the ninth wicket was too little too late and eventually South Canterbury were dismissed for 177, still 44 runs shy of victory.

There is a break next weekend before the Hawke Cup gets under way the following weekend, and South Canterbury will be looking for a lot more consistency.