This weekend sees the inaugural SC Cricket Board Twenty/20 Tournament which will be played between four teams throughout the day at the Aorangi Oval on December 20th.

There should be plenty of fun and entertainment for players and spectators alike with The Loaded Hog and Speights major sponsors as well as having the Port FM outside broadcast unit also in attendance. 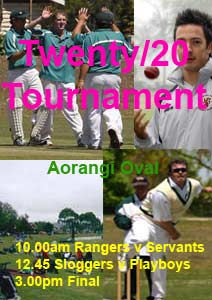 $1000 first prize is up for grabs for the winning team.

There are four teams made up as follows;

Kings Servants – This is an Invitation XI picked by SCCA Chairman & Canterbury Cricket Board member Harvey King and while expected to give some of the local schoolboy talent an opportunity in the big time, may also provide some surprise selections. These players will be expected to perform with the same dedication Harvey showed in his playing days as evidenced by their team name!

The first game starts at 10.00am between the Rangers & Servants.

Match 2 sees the Sloggers take on the Playboys at 12.45pm

The final is to be played between the winners of the first two matches and will start at 3.00 pm

It should be a great day’s entertainment with many of South Canterbury’s best cricketers on display and is free to watch.

Bring your family and children along for a great day’s cricket.