Harvey King Resigns as Chairman after Decade at the Helm 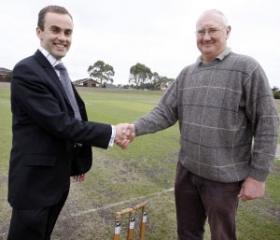 WHEN Harvey King stepped into South Canterbury Cricket top job the association was on the brink of financial disaster with a big fight on its hands.

A decade later, while no large cash surpluses existed, the association has a healthy balance sheet and its future looks bright.

King, a lively bowler in his time, has enjoyed his time in charge immensely, but believes the time is right to move on.

He hands over the reins to lawyer Andrew McRae, who still plays senior cricket for Star as a batsman. “It’s just time to move on and Andrew is a very good cricket man, with fresh ideas and enthusiasm.”
McRae had previously been involved with Old Boys Collegians and Canterbury Cricket, before moving to Timaru.

Fortunately, King will not be lost to cricket. Last year, he was elected to the board of Canterbury Cricket. He intends to stay on.

The former chairman says he has enjoyed his time at the helm of South Canterbury.
“I guess its a job where you have to roll the sleeves up and get stuck in.”

Highlights of his time in charge include the building of the Graeme Blanchard Centre, a facility that allows the cricketers to train all year round, and hosting first-class games at Aorangi Oval, which in the main were run-fests. King hopes they will return despite the off-field facilities not being up to the standards demanded by New Zealand Cricket.

“We are hoping to gain a temporary warrant of fitness to allow domestic one-dayers or Twenty-20 games to return because they were popular, including with the players.”
Always a true competitor, King is also pleased that the junior cricketers, from primary to under 19, are starting to taste success.

The senior side winning the Hawke Cup also rates as a big highlight, he said. “You hope cricketers develop and for us the Hawke Cup is the big one.”

King said the appointment of an executive officer run the daily business was a real bonus. “Graham Broker is doing a great job, and it keeps us ticking over nicely.”
However, he admits the role of chairman in South Canterbury is a broad one. “South Canterbury, and associations like ours the top job doesn’t mean you don’t keep the shoulder to the wheel.”

A passionate man, King still umpires, helps with coaching and keeps his hand in at the grassroots of the game.
“Cricket gave me some great times, so I was happy to give something back, but I wouldn’t have been able to do it without the support from Lois and the family.”