In a fitting end to the season, the final of the Tweedy Cup Senior Two Day cricket competition came down to a nerve wracking last hour and a half before Geraldine were eventually able to begin celebrating their first win since the 1999/00 season. Guy Metcalf will be first in line for drinks after he took 2-6 with the ball and followed that up with a very solid 75, part of the better team effort in the match. 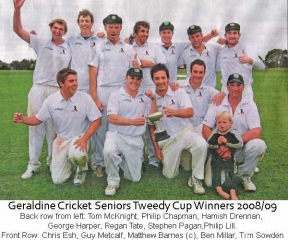 Geraldine had looked to be cruising to victory at 195-4 chasing 262 for the first innings lead, and hence the trophy, when suddenly Star got themselves back into the match. They dismissed a mercurial Matt Barnes for 53 and then when danger man Hamish Drennan followed for only 7 shortly later suddenly the Star players body language changed as they realized they were still in with a chance.

An inspired bowling change by Phil McGregor when he brought Jeremy Lane back into the attack paid dividends after he dismissed Guy Metcalf and then Tim Sowden next ball to finish the over with a hat trick pending and Geraldine suddenly in trouble at 239 – 7.

Regan Tate got to 21 before the “caught Arkinstall, bowled Hinton” pair struck again and Geraldine were perilously poised at 256-8. Chris Esh joined Phil Lill at the crease, but this time he couldn’t see Geraldine through as he had done in the round robin match after lofting a ball to McGregor at mid-off having advanced the score only 2 runs to 258-9.

The outwardly appearing calm figure of Phil Chapman, the self-proclaimed “Chris Martin” of the Geraldine team strode to the middle to face a fired up Lane. He successfully negotiated the first delivery before Lane strayed onto leg with the next delivery and he was good enough to get pad on it as it ran agonizingly slowly for the Geraldine team and supporters to the boundary to give them victory.

Star who have had a very successful season making the final of both one day and two day finals, will feel dejected after picking up the ‘bridesmaid’ tag in both finals, and it was unfortunate for them in both cases that they were not able to follow up good plans with execution.

After winning the toss they batted first on the Oval, which is renowned for being a batsmen’s paradise, and they knew they would need to bat all day, possibly longer and set an imposing total so that their bowlers had plenty to play with.

Phil McGregor continued as he has all season, opening and playing the anchor role while the others score around him. He lost Tom Bouch early after he forgot to ground his bat running to the non-strikers end and was run out by a direct hit by Matt Barnes. Paul Arkinstall helped get the score through to 47 before he fell for 24, and then Todd Elliotte joined him and together the pair added 138 runs with Elliotte dominating all the bowlers as he got the scoreboard ticking. Unfortunately for Todd, he fell 3 runs short of what would have been his second club century after a successful LBW appeal. 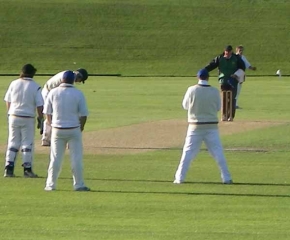 McGregor continued on, not losing his wicket as often happens after a long partnership, but there was a steady procession back to the pavilion as the Geraldine medium pacers quickly showed that bowling wicket to wicket was the best way of restricting batsmen, and forced many to play injudicious shots as the pressure was applied.

Sowden and Tom McKnight toiled away successfully with Chris Esh into the wind, while Chapman and Metcalf picked up the wickets downwind, as seven Star batsmen failed to make double figures. McGregor was eventually out after 276 minutes for a solid 84, but his team was always at least fifty runs short after being dismissed for 261.

With 13 overs to be bowled before stumps, Star were happy at stumps with Stephen Pagan back in the shed after a brilliant diving catch by Hamish Dickson in the gully, and Geraldine 10-1, but night watchman McKnight soon showed the next morning he had other ideas, setting up what became a successful run chase. 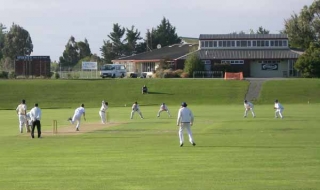 In partnership with Ben Millar, and all day to bat, they took their time as they got themselves in and then worried about the runs. When Millar went for 48, the pair had added 78 runs, and although McKnight was out 12 runs later for 33, some of the shine was gone and this and the following partnerships became the difference between the teams. 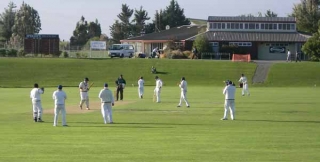 The Star bowlers tried hard all day with Craig Hinton taking 4 wickets from 28 overs, while Todd Elliotte and Tim Butler made the initial breakthroughs, but as it turned out, the paucity of runs on the board by Star made it tough work on the bowlers as they tried to peg Geraldine back, and in the end the thrilling finish was a real fillip for those administrators and spectators who had braved the cold southerly for two days.