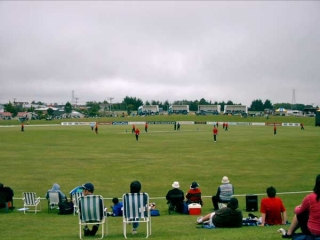 First-class cricket is set to return to Aorangi Oval this summer after a five-year absence.

“Given the international programme, all indications are that the Black Cap players will be available for selection at this time.

However, Mr McRae said he was confident they will be able to resolve those issues in time for the first fixture.

One of the big issues is the size of the changing rooms available in the pavilion but the association is looking at some innovative options including the possible use of portable buildings.

Mr McRae is also very happy with the scheduling of the games.

“The timing of this all-important fixture will allow the locals, and those coming to Timaru for the Caroline Bay Carnival, to watch high-class cricket and view some of the best players in New Zealand here in Timaru.

“Of course `local boy’ Hamish Bennett has been a regular feature of the Canterbury side in recent seasons and it would be good to see him return to play in front of his home crowd.

McRae said it had been five years since first-class cricket was played on Aorangi.

“Following that fixture a detailed checklist of requirements for host venues was drafted by New Zealand Cricket in conjunction with the New Zealand Players’ Association.”

“The Aorangi pavilion fell foul of those requirements due to space limitations which have kept first-class cricket out of this region ever since.”

McRae said it had been a frustrating period which had not helped the development of the game in South Canterbury.

“This is an opportunity that we must grab with both hands to show South Canterbury is capable of hosting such events.

“If the fixtures are well-supported then first-class cricket at Aorangi will be a regular feature of South Canterbury summers”.

New Zealand Cricket chief executive Justin Vaughan said the 2009-10 summer was shaping up to be the busiest and most interesting season of domestic cricket for many years.

“As well as the exciting new HRV Cup Twenty20 tournament – which will feature our Black Cap players – we have also committed to an extended four-day programme.

“We’ve also retained a strong 50-over competition culminating in a televised final – so there’s plenty of cricket for fans to enjoy, and we expect the inter-provincial rivalry to be stronger than ever.”

Five rounds will be played in the Twenty20 competition, with matches played on the days before or after the one-day games.