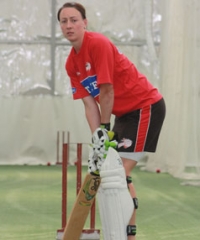 Roncalli College physical education teacher Amber Boyce has had a meteoric rise into New Zealand Cricket’s Emerging White Ferns after only a year in the game.

Boyce, a middle-order batter, came to prominence in the women’s provincial one-day final last year when she got the Canterbury Magicians home in a whirlwind last wicket stand, scoring 30 off 15 balls.

What was extraordinary was the fact it was the 25-year-old’s first year back in the sport since she attended Marlborough Girls’ College.

She started to get interested in cricket again by helping students at Roncalli.

Hooked by the challenge, she has stepped aside from golf after representing Aorangi last year and playing off a two handicap, to concentrate on hockey and cricket.

“I like the challenge and with cricket, I want to see how far I can go.”

In winter Boyce was in the champion St Andrews’ senior hockey side and scored the match-winning goal in the final.

She has been Hockey South Canterbury’s player of the year for the past two seasons.

She went on to represent the Otago representative side, the Southern Storm, in the national hockey league.

Last term, Boyce travelled around New Zealand depending where the game was – to Dunedin for hockey practice and Christchurch for cricket practice with the Magicians – clocking up more than 1000 kilometres a week.

“I guess I’m two hours from anywhere I need to be.”

She is happy to call Timaru home despite the hectic travel schedule.

Boyce said she had always loved sport, helped by her hand-eye co-ordination.

“I represented Tasman in golf at 15, then Otago and Aorangi and maybe when I’m a bit older, I will go back to it. For now, the focus is cricket and I’m really looking forward to playing in Australia,” Boyce said. She will go to Brisbane for 10 days to play against the Australian under-21 side in four Twenty20 games and two one-day internationals.