24 hours in the life of Greg Hull – SCCA Groundsman 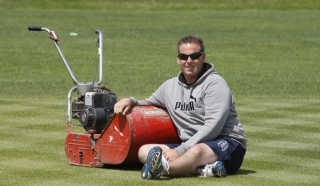 Nervous times: Aorangi Oval groundsman Greg Hull knows he will prepare a good pitch for the return of top-level domestic cricket to South Canterbury on December 31, but it is not enough to calm his nerves before the big day.

Top level domestic cricket returns to Timaru for the first time in nearly five years on Thursday, when Canterbury and Otago clash in a one-day game at Aorangi Oval. For groundsman Greg Hull that means some nerves about how the pitch he’s preparing will play on the day. He spoke to Jacob Page about what that 24 hours of his life should be like.

I’ll be nervous as hell, I know that.

I’m going to stay the night here, at the ground, to make sure nothing happens.

I won’t get much sleep.

Get the covers off.

Give it a mow.

Get the sight screens out.

Within half an hour before the game you give the pitch a seven-minute roll, (it’s in the rules), and generally make the pitch look more aesthetic; just make sure everything looks good.

You’re nervous as hell for a while, until the first over is away and then everything is all right.

In the days leading up to the game the preparation is meticulous and scientific.

Basically, taking a lot of core samples out (of the pitch), so you know what’s going on in the soil underneath the grass.

It’s a bulk density test, so you take little samples out, divide them into thirds, weigh them and then microwave them to get all the moisture out, weigh them again, do some maths and that’s how you figure out how hard your pitch is.

You do a lot of watering and a lot of slow rolling.

I timed it once when I was [slow rolling the pitch] at Eden Park, and it takes you 19 minutes to walk from one end of the pitch to the other.

You just make sure that the cracks in the surface don’t open up too much, because that can cause the variable bounce you sometimes see.

You can only do what you know and what you’ve been taught and what works best, but sometimes you don’t know how your pitch is going to go.

That would be the worst thing, if it was inconsistent, like if [a ball bounces] low, or if one goes high off a good length.

The outfield would be the major worry. The players are running in hard so they don’t want any slipperiness.

Bringing back cricket to the community, it’s massive, so I’ll be hugely nervous.

It starts in the days leading up to it, but you definitely feel it on the morning of the match.

I still get nervous for a local match.

I’ll be nervous the day of the game, I probably won’t be saying much.

You spend so much time on it, worrying about it and wondering.

I’m thinking a lot about it now.

You know it’s all right by the look and the feel [of the pitch], but until the first ball is bowled, you don’t really relax, especially for such a big game. It’s a fair bit of pressure.

Ideally you want the batting team to get 290 [runs] and for it to be a close game, so it gives people something to watch.

I want [the pitch] to be quite fast, have good carry, and then for there to be a bit of spin near the end of each innings.

Ideally you want a wicket which is going to have something in it for everyone.

I always had a dream of working in a big stadium, and I got the opportunity to work at Eden Park.

There were four of us working under Auckland groundsman Mark Perham so we didn’t feel the pressure as much as he did.

We all knew our job, so it was pretty easy.

Mark felt the pressure though. You didn’t go near him the day of the game. You wouldn’t see him.

It was always my dream job, but basically you worked seven days a week.

You were lucky to get a day off (over the summer months), because you had that much cricket on, so you got over it.

Everyone wants to have a life, but you don’t want to live to work, do you?

It should be the other way around.

I came back to Timaru, to help look after my Dad, who died of cancer, and a friend told me the job was available and I thought, “yeah, that would suit me perfectly”, because I was back at home with Mum and my brother, and it was only 20 hours a week, so it worked in perfectly and I knew I’d enjoy it.

I don’t know what I’ll do after the contract expires, but if something like this does come up, I’ll definitely consider it. I love doing this.

You’ve got to, otherwise you won’t get too far.

I listen to everyone who has an opinion, even if they work at a lesser ground. You just take what you can from what they say.

I do love this job, being outdoors.

The good days far outweigh the bad ones.