Sam Carlaw shrugged off the disappointment of being dropped from the Hawke Cup team by making two scintillating innings with the bat, one of which was a family affair in a long partnership with his father Bruce, as he lead Celtic to two wins in the first rounds of the inaugural club senior Twenty20 competition during the weekend, matching Geraldine as teams to win twice.

Celtic posted 158-5 in their first match in Temuka after Sam scored 48 not out and Bruce 45 and this proved to be far too many for Temuka who scored 119-8 with Johnny Geddis continuing his fine season by top-scoring with 40. Despite missing seven players on rep duty, Celtic’s bowlers all stood up, and Grant Watt led the way after coercing the Temuka batsmen into a false sense of security by conceding 18 runs from his first over, and had the last laugh by taking 4-29. The Carlaw’s were again in on the act with a wicket each too.

Due to the nature of the draw Celtic then had to jump into their cars and travel to Ashbury Park for their next match against Star who had won their first game with only three balls to spare against Waimate after Paul Arkinstall’s 54 in a 75 run partnership with young Willie Wright had been the difference between the teams. Star did stutter near the end as Jason Sew Hoy took two wickets in two balls, but perhaps an omen of the day when it came to the Waimate performance reared its head again as an easy catch was put down in Alan Reid’s final over when the pressure was on. 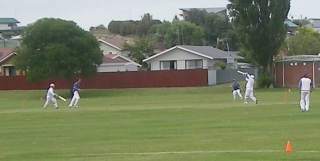 The roller then came out, a decision Star may have rued after Celtic batted first and took the game away from them scoring 203-4 from their 20 overs. This time Ryan de Joux got going, and as T20 suits his style of game he may have had visions of a century as he brought up his half century in less than six overs before being out caught for 66. Fellow opener Andy Scott wasn’t to be outdone as the pair added 92 for the opening stand, and one six by Scott won the hardest to find prize of the day.

The departure of de Joux was little relief for the Star bowlers as Sam Carlaw continued his fine form from Temuka hitting six sixes on his way to 63 and Star new it would be hard work having to score at more than 10 an over to win. Arkinstall gave it a shot completing a fine double with 46 but he had little support and with No 10 Jeremy Lane next best with 12 runs Star were well short when dismissed for 124 in the 17th over.

While the Celtic club was showing their depth and dominance in all versions of the game, Waimate traipsed across Ashbury to play Timaru. Unfortunately as Geraldine had found out in the early game, Waimate were about to play cricket on an under-prepared and dangerous pitch. With the slower the bowler the more dangerous the bounce, even the keepers resorted to wearing a helmet for safety as the balls popped and moved alarmingly off a length.

The state of the pitch unfortunately led to very low scoring matches, and certainly not the shot making spectacle expected from the Twenty20 format. In the first game Timaru could only manage 68 runs against Geraldine with Grant Brookland top scoring with 19 not out. For Geraldine Michael King was the best of the bowlers with 3-12, but the run chase was not as easy as expected and Geraldine lost six wickets on their way to a win, but a 37 run partnership between Gary Muff (25*) and Phill Lill (15) got them home despite Kris Howes best efforts with 2-5 from his 4 overs.

Brookland took encouragement from his first innings and opened the batting against Waimate this time making 40 as he again top-scored for Timaru, and this time had support from Howes with 32 allowing Timaru to score a competitive 112-4.

In reply Waimate struggled to build partnerships and to play the variable bounce and in the end could only manage 95 after the asking rate spiraled away from them. Rob Beeching top-scored with 25 and Nathan Sheppard was next best, not out on 16, but the enjoyment for players and spectators alike had long been lost after playing a match in sub standard conditions.

Geraldine imbued with enthusiasm after winning their first match travelled to Temuka for their second match and again enjoyed success chasing down the 158 Temuka posted. Temuka’s Les Humphris and Ritchie Preston both scored 65, but this time they were outshone by another young player, Geraldine’s Michael King who followed up his 3 wickets in the first match by top-scoring for the Geraldine day with 62, a fitting time to score his first senior fifty and with all the Geraldine batsmen contributing to solid partnerships, Geraldine emerged the victors.