Cricketers will see pink in bid to add colour 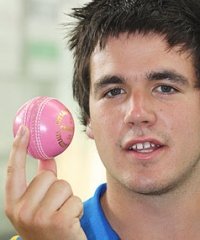 Is pink the new white? That’s what senior cricketers will be asking themselves on Saturday.

For the first time the bowlers will trial a new pink leather cricket ball.

The appears to be no scientific reason for the change but it is being used to add more colour to the shortest form of the game.

The move from red to white balls was made many years ago to help cricketers in the day-night matches. Now pink could soon be the colour of the day.

Davidson said the Platypus balls were also being trialled elsewhere and he believed there would be no problems.

Pink itself has also made an amazing transformation. In the past pink was seldom associated with sport, especially sports for tough alpha males.

United States gridiron teams even adopted the bizarre practice of dressing underperforming players in pink shirts as a punishment.

A US football magazine gives a “pink” card to players it accuses of diving.

The meaning was clear: pink was not masculine and was disgraceful.

That has all changed however after French rugby monsters Stade Francais went to glory wearing pink a couple of seasons ago. Even the fans wear it.

Pink shirts, cricket bat handles and hats have been worn by sports stars to raise awareness about breast cancer including the Middlesex Twenty20 cricket team.

For some cricket die-hards however the sound of “pink” leather on willow may never be the same.