Dream century one of a kind 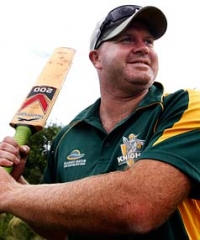 He’s no Lance Cairns but for one Saturday in Timaru, he sure batted like him.

Cricketer Jeremy Anderson, or `Hoss’ as he is better known, has never had a day at the crease like he had on Saturday at Rockdale, and by his own admission, he probably won’t again.

The smattering of fans watching were in awe, and in danger, as the Celtic Senior Reserve middle-order batsman pummelled a hapless Timaru Boys’ High School Senior Reserve bowling attack for nine sixes in a quick-fire century that took less than forty balls.

Anderson said he had always dreamed of doing something like Lance Cairns, with no success.

“I always go out there and try and have a bit of a go, and then it doesn’t really work out, until now.”

“I was on the verge of making it my last game.

“I thought I could give it up and go fishing instead”, Anderson joked.

He claimed he could have got to the century faster had it not been for a message from his team-mates.

The bat itself is no one-time wonder like Excalibur, as Anderson has used it many times with little success.

Anderson said he knew the innings would be important in the outcome of the match, despite one of the team’s openers also scoring a century.

“I knew I probably needed to get some runs, knowing how some of our bowlers go at times.

On 104, and tired, Hoss’ heroics finally came to an end

When he was asked about where his career could go from here, Anderson was blunt.

Whatever happens, he will always have the memory of his day in the sun at Rockdale Rd.