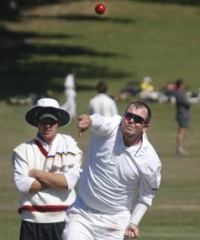 The South Canterbury cricket side head into their second Hawke Cup elimination game of the season full of confidence.

South Canterbury face neighbours Mid Canterbury over the weekend at the Aorangi Bowl, after their first game against Southland was abandoned.

The southerners could not find a suitable pitch after heavy rain, meaning the points were shared.

Coach Richard Davidson has named an experienced lineup although there are a couple of youngsters in the mix.

Roncalli College’s Sam Carlaw has been included as the second spinner as Aorangi is known to favour the batsmen and can be hard work for the seamers on a flat track.

The young left-arm orthodox bowler has shown plenty of potential and could get a lots of overs in tandem with captain Todd Elliotte.

Elliotte is heading towards a big milestone of his own, clocking up his 99th appearance for South Canterbury and is already the province’s most successful wicket taker.

His bowling performance could prove critical on the second day.

Left-armer Craig Hinton will open the bowling with the reliable Kevin Teahen.

Craig Davies is set to open the batting with Jeremy Liddy.

Davies had a hugely successful off-season in England and the side will be looking to him to get away to a good start.

English import Matt Barnes will bat at number three and is also capable of getting a big score.

Matt Mealings, Dan Laming and Glenn Mathews will make up the middle order and give the side a solid look.

Mathews has returned from a couple of years in England and has been the form player in the club competition.

Laming can turn a game, making him another key player.

Both Laming and Mathews will be expected to bowl a few overs at some stage while Luke Taylor returns with the gloves.

Two players unlucky to miss out were Grant Brookland and James Laming. Brookland has thrived in the club competition after taking over Timaru’s captaincy.

Mid Canterbury’s record to date has been poor with a first innings and outright losses, so they will be looking to get their season back on track.

Play gets under way at the Aorangi Oval at 10am.