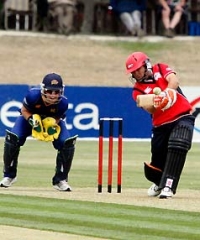 It was a day the bowlers would like to forget at Aorangi Oval in Timaru as batting records tumbled, and domestic cricket returned to South Canterbury with a bang.

Canterbury won the match by 39 runs on the back of Rob Nicol’s 132, but Otago proved no push-overs, as a gallant Neil Broom pummelled 164 to overshadow Nicol, albeit in a losing cause.

Canterbury amassed a record New Zealand one-day domestic score of 410 for 5, which beat the previous record of 376 for 3 by Central Districts in 1996.

Once adjusted to the conditions, the Canterbury openers of Nicol and Michael Papps began to play freely, carving Otago’s opening bowlers to all parts of the ground, even the introduction of former Pakistani player Yasir Arafat and former Black Cap Ian Butler couldn’t stop the flow of runs.

Papps looked the more in control of the two batsmen, with Nicol being fortunate not to edge a couple of deliveries onto his stumps, and have a couple of streaky edges not find a fielder behind the wicket.

Nicol brought up his 50 off 42 balls and Papps was not far behind raising his bat off 45 balls, with the 100-run partnership coming up off 92 balls.

The introduction of the slow bowlers slowed the run rate temporarily, but a wicket seemed impossible to get for the hapless Otago bowlers.

It took part-time bowler Neil Broom to remove Papps who was bowled a run-a-ball 78, with the score on 160.

Any thoughts the Otago bowlers had of being back in the game evaporated as Peter Fulton came out and smacked a blistering 88 off 61 balls.

Meanwhile Nicol bought up his second career domestic century and was eventually dismissed 132 off 108.

Shannan Stewart then came in and proceeded to ruin Cumming’s day further.

The highest score in New Zealand domestic cricket history was always going to be a tough ask.

Otago’s effort in reply was valiant, but in vain.

Despite scoring at over a run a ball for most of the innings, the asking run rate of more than eight runs an over proved too much.

Otago owed much credit for their chase to Neil Broom, who stood tall, keeping Otago clinging to the hope of a miraculous victory, his innings which included 12 fours and seven sixes was a sparkling knock, but he was unable to find a partner who could stick with him long enough.

Neil Broom struck the ball cleanly for most of his innings, until he was caught off the bowling of Ellis, as the required run rate began to spiral out of control.

Despite a late half century by Butler, as Neil Broom walked off to the appreciative applause of the crowd, Otago’s brave challenge had come to an end.

The win lifts Canterbury to second on the competition table, Otago remain in fifth.