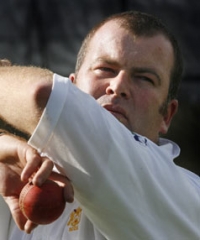 South Canterbury cricket captain Todd Elliotte will be elevated to an elite group of players when he notches up 100 games for his province against North Otago tomorrow.

Only three other players have became centurions for South Canterbury Cricket, with Barrie Andrews leading the list with 127 games. John Varcoe played 109, while former test player John Ward was the first to break the magic mark and he went on to play 127 games.

Off-spinner Elliotte has already etched his name into the record books when eclipsing Phil d’Auvergne as South Canterbury cricket’s highest wicket-taker in 2007. The 35-year-old has since lifted his tally to 286, but is unlikely to break the magical 300 mark as he is set to retire from representative cricket at the end of the season, to concentrate on his young family.

Since then, apart from a year teaching English in Korea and a brief stint in Christchurch, Elliotte has been a stalwart of the South Canterbury side, captaining them for almost the past decade.

The off-spinner’s best effort was grabbing 11 wickets against Mid Canterbury, and over his 18 seasons of playing for South Canterbury has several 10 wicket bags.

The accurate off spinner has however never managed to grab a hat-trick.

Elliotte has loved his time playing representative cricket but said family needed to come first. He has, however, set up a wicket in his backyard for his three-year-old son Harry, with nine-month-old Max a keen spectator.

Elliotte has not only been successful with the ball, he has also proved handy with the bat, with a top score of 123 against Canterbury Country.

His highlight was the 2000 season which culminated in South Canterbury hoisting the Hawke Cup.

Elliotte said he had always enjoyed cricket because of the people he played with. “The best move was when I pulled the pin in Christchurch, I’ve just loved playing for South Canterbury.

“There have been some tremendous games and I just loved being part of them.”

South Canterbury coach Richard Davidson said it was a tremendous milestone for the skipper. “Todd really deserves it, he is highly respected by his peers and his opponents and he stuck with South Canterbury rather move away, which is a credit to him.

“Batsmen knew they were in for a battle when they faced him.”

The talented allrounder will not be lost to cricket completely choosing to continue playing for his club, Star.

“I owe it to them because of the support they have shown to me.”

South Canterbury will need to beat North Otago outright in Oamaru to have any chance of challenging for the Hawke Cup.