Davies leads push for a gutsy draw with North Otago 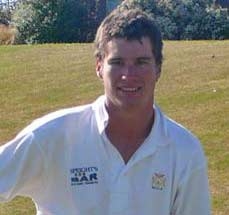 Craig Davies was again the toast of the South Canterbury team after his second innings century helped them to draw their Hawke Cup match in Oamaru against North Otago over the weekend after being 227 runs behind on the first innings. Davies batted for 279 minutes and faced 250 balls on his way to making 156 as he steered South Canterbury to safety.

South Canterbury won the toss and asked North Otago to bat first on the Centennial Park pitch which only the weekend before had drawn complaints due to poor preparation from the Southland coach after his team was beaten outright.

However, for South Canterbury the pitch didn’t seem to show these demons as North Otago progressed along at a steady rate. Kevin Teahen took the first three wickets to fall continuing his like for North Otago scalps from the pre-season match, but it was skipper Todd Elliotte playing his 100th match who sparked the South Canterbury hopes after taking two wickets in three deliveries to have North Otago 150-5.

Unfortunately North Otago soon took back control as their Otago representative player Sean Eathorne again showed his liking for South Canterbury bowlers with another century (his previous was in the Mark Parker Memorial match) and this time he found support from his No7 as they added 118 runs before South Canterbury’s Craig Hinton made the next breakthrough, and this helped North Otago to post 344.

South Canterbury’s reply began steadily if not spectacularly and day one finished with the score at 86-5. Unfortunately the dawn of day two did not bode well as SC slumped to 117-9 when they were forced to declare because an injured Dan Laming was unable to bat properly and retired hurt.

Batting a second time the South Canterbury batsmen proved to be much more resolute with Davies leading the way and he had good support from Matt Barnes (39) in a 78 run partnership for the second wicket and then later he added 58 runs with fellow centurion (of a different kind) and captain Todd Elliotte who scored 63 as SC firstly chased down the huge deficit to at least make North Otago bat again. They achieved this first target by tea for the loss of only 4 wickets and then had to bat most of the last session to make sure North Otago were not in a position to make a successful run chase, and eventually the match finished in a draw.

South Canterbury after a much more polished performance managed to bat most of the day and had scored 358-8 when stumps were pulled. This should buoy their confidence as they go into their final match at home on February 20th against Otago Country who will be playing their third match in as many weekends and with Country looking for a good result to help them win the Hawke Cup, a strong effort by South Canterbury will be eagerly watched by both North Otago and Southland.

Elliotte said he was pleased with how his team fought in the second innings.

“We looked at the way we played in the first innings and it was just a matter of knowing we had to pull our socks up and say `hey, we’re playing for South Canterbury here’.

“We knew we had to bat for most of the last day and the guys really dug in.”

The South Canterbury captain said losing Laming to a possible side-strain during North Otago’s first innings affected the balance of the team.

“He (Laming) can usually tie up an end pretty well; losing him meant we were left with three fast bowlers and two spinners.

“He’s also a vital part of our batting lineup at No4.”

Elliotte said taking two quick wickets with the ball in the first innings eased any nerves he had about his 100th game.

“The bowling went well, but being dismissed for a duck (0) in the first innings wasn’t great.”

He said he enjoyed being able to contribute to the second innings fightback, by scoring 63.

“We knew we had to bat all day, but when Craig (Davies) and I were out there, we knew we could do it, and the rest of the guys did a really good job lower in the order.”

He said the team would take a lot of confidence from the performance into their next game against Otago Country, knowing they can spoil Otago Country’s chances of progressing further in the Hawke Cup.