An opening partnership of 188 runs after being put in to bat by Otago Country between century maker Craig Davies with 129 and Jeremy Liddy 69 put the South Canterbury cricket team in a dominant position for the rest of the match in their final Hawke Cup match of the season. Unfortunately no one told Otago Country and the match went right to the wire.

The match began with Otago Country needing first innings points to tie with North Otago at the top of the table, and therefore win the right to challenge for the Hawke Cup because they had beaten North Otago in pool play. This probably impacted on their decision to play to their strength and bowl first, but a South Canterbury side playing for pride soon took control of the game and never looked back.

Davies second consecutive Hawke Cup century was chanceless as he and Liddy took their time to get used to the bounce at Aorangi, but after they had got themselves in the shot making from the pair blossomed and when they went to lunch the score was 149 with Davies (88) in sight of his ton, while Liddy had just brought up his half century.

It was hard work for the Country bowlers, although perhaps they are more used to the heat, but eventually the breakthrough came when Liddy was out caught for 69. Davies then lost his next two partners cheaply, perhaps a reflection on their four hour wait with pads on before he finally fell for 129.

Country perked up, but then poor catching did not help their cause as Alexander McKenzie made 47 after a couple of early chances, Glenn Matthews 21, and then Andy Scott made the most of his return to the team with an impressive 45 not out and was looking for his fifty when he ran out of partners. South Canterbury by now had posted 376 and left plenty for Country to do.

Runs on the board build their own pressures and Matthews and Craig Hinton soon made breakthroughs including the night watchmen for a duck to have Country reeling at 30-3 before eventually finishing the day at 56-3.

Day two dawned even hotter and the South Canterbury side was set for a long day in the field. The first three hour session only heralded one wicket when Hinton removed Brendan Domigan the Otago Country captain for 45 but James Pyle at the other end seemed in little trouble, and with new partner Fraser Wilson had put Otago Country right back in the match when they went to lunch with the score 226-4 and Wilson 83 not out and Pyle 67 not out.

Lunches tend to benefit fielding sides and this time it was no different as Wilson played inside the line and was bowled by Todd Elliotte for 91. A few runs later and Pyle played lazily at a delivery outside off and was caught by Elliotte at first slip off Hinton and suddenly the South Canterbury heads were up and the eagerness could be seen. Matthews trapped Petre lbw and at 296-8 South Canterbury were back in charge.

The ebbs and flows of the game continued however, as edges were spilled, or more often than not didn’t quite carry and Otago Country got themselves back into the favourite’s position as Cameron Rutherford and Ronnie Kotkamp put on a big partnership and went to tea only needing another 46 runs. 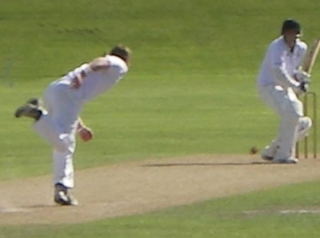 After tea Elliotte brought his main strike bowlers back on as South Canterbury looked for a breakthrough, but it didn’t come until Otago had 371 on the board and only required a further seven runs to make use of the tickets to the final they had already booked.

Hinton bowling his 35th over in a huge day at the office caught the edge of Kotkamp’s bat and it flew low through to keeper Andy Scott who was up to the task and took the catch. The batsman hung around as he was uncertain if it had carried, but the umpires confirmed his demise which brought No 11 Ben Purvis to face the last five balls of the Hinton over while Rutherford, now 58 not out, could only watch from the far end.

Hinton knew he had to be online and make Purvis play and his first delivery was right on the spot rapping the batsman’s pads. The whole team went up in appeal, the umpire obliged, and Otago Country was dismissed for 371 giving South Canterbury the first innings win and Hinton his fifth wicket.

A great end to an intriguing cricket match and perhaps also a fitting farewell to captain Todd Elliotte after 101 games for his province, although he would probably have liked the five more wickets he needed to bag 300. The first season in the new zone did not go well for South Canterbury finishing second last, but this match will have given them a lot more confidence heading into next season.