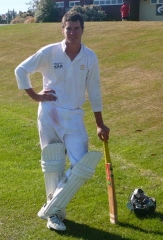 Craig Davies was again the star of the show hitting a boundary behind square to bring up his hundred and the winning runs for Celtic in a tight final to the Daily Freightways One Day Trophy played at Aorangi Oval.

The battle started right from the first over when a shorter delivery from Glenn Matthews rapped Temuka opening batsman Michael Geddis on the helmet. Three balls later he was gone, and Matthews followed this up removing Les Humphris for 1 and Johnny Geddis for 2 as Temuka slumped to 16-3, and even some of their most ardent followers had a look of gloom about them, but Captain Ritchie Preston soon lifted their spirits.

Preston battled on doggedly and while his partners came and went, they all contributed some time in the middle as Preston worked the ball around or off his pads to keep the score building. Runs were always at a premium especially during the middle stages as Jeremy Liddy and James Laming both bowled good lines, keeping the ball up and utilizing the swing they were able to get. Liddy took 3-23 from his 9 overs while Laming was even more miserly taking 1-16.

Celtic used 9 bowlers showing the depth in their team, but when Simon Attridge joined Preston with the score 92-7 things still looked grim. Together they added 51 runs during which time Preston brought up his half century, then when Attridge was out for 9, Paul Coles came in and played a great little cameo of 22 as the score progressed to 177 before Matthews claimed his fourth victim in a great display of fast bowling. Dillon Lees threw the bat at everything and scored another 10 from the final over and Temuka ended with a competitive total of 187 on the back of the 74 not out by Preston.

Kevin Teahen removed Ryan De Joux without scoring in the first over and suddenly the Temuka fielders were looking really inspired as the team chatter and enthusiasm was plain to see. Paul Coles was bowling well from the other end, but Davies and Liddy now settled down taking the time to get in. Liddy made use of the fielding restrictions with a couple of aerial drives and was looking quite settled when dismissed lbw by Coles for 16. Dan Laming’s season continued with no luck as he was given out caught behind soon after.

Some tremors could be seen in the Celtic lineup as the pressure came on, and were further heightened after James Laming also became an lbw victim and then when Coles bowled Matthews without scoring, Celtic still had plenty to do at 92-5.

Throughout all this Davies had batted patiently at the other end, only playing at deliveries he had to, and waiting for the bad ball which he more often than not sent to the boundary. While he was in Temuka were always going to struggle to win, but Davies main problem was to find a partner who would also hang around.

He found this partner in Matt Mealings. Mealings played some nice shots as well as a couple of streaky shots, but generally he was sound on his way to 36 not out, and in the end it became a question of whether Davies would reach his century before the winning target was reached.

Celtic supporters roared at Mealings to not score any more, so he promptly rocketed another ball to the boundary, and finally it came down to Celtic needing two runs to win and Davies four for his ton, meaning he had to score a boundary. Preston brought himself on for the ‘Coup de Gras’ and his first delivery was called wide, but Davies got onto the next ball flicking it to leg for his 16th boundary and bringing up a deserved century, and he was soon swamped by jubilant team mates, as Celtic picked up the second leg of the treble of trophies they are chasing this season.