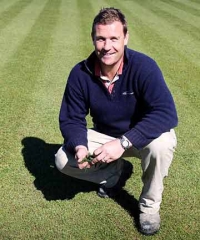 The Aorangi Oval has a new groundsman for the 2010-2011 cricket season, but his focus won’t just be on South Canterbury’s premiere pitch.

Mike Davies has taken over as the groundsman at the oval, from Greg Hull, who looked after the wicket last season, but indicated he did not wish to continue.

The 35-year-old former Christchurch man has spent four years as the greenkeeper at the Timaru Golf Club, a job he will continue to hold, in addition to his duties with South Canterbury Cricket.

Davies will also take on an advisory role for the Ashbury Park pitches, in an attempt to improve the quality of the wickets at the ground. He will be supported by long-time Aorangi Oval groundsman Brian Hyslop, as he adjusts to his new role.

South Canterbury Cricket president Andrew McRae said he was delighted to have Davies on board for a busy season.

He said the dual role with Ash-bury Park was an opportunity to improve the quality of the pitches, before an under-16 tournament in mid-December.

“It was important for the role to encompass Ashbury and we’re hoping that with his experience he will be able to improve the standard of the pitches there.”

McRae said the standard of the Asbury Park wickets had “been a concern for some time” and he hoped Davies, with the advice of Hyslop, could raise the bar.

“I think the main reason was a lack of preparation time spent on the [Ashbury] wickets and it’s hoped Mike will be able to use his expertise to improve [the situation].”

Having only a short stint with cricket pitches during a brief period in Auckland, Davies said he was drawn to the job by the challenge it offered. “My family love South Canterbury and this is a chance to broaden my horizons and keep us here.

“I’m the kind of person who’s not afraid to ask [questions] and find that support around me.

“I’m absolutely 100 per cent confident otherwise I certainly wouldn’t do it, it’s not me.

Davies said the pressure to keep the Aorangi Oval pitch at the same level which saw more than 800 runs scored in a domestic one-day game between Canterbury and Otago last year, would be something he would thrive on.

“You’ve got to have those challenges,” he said. You need that for motivation to try to get better, or at least as good as [good as it wa]).”

He said getting continuity in the preparation of the Ashbury Park wickets would be the important thing to gaining improvement.

“Hopefully with the permanent, technical support for those wickets, we can slowly work away at it and improve all the blocks down there, because it’s critical for South Canterbury cricket.

Davies said the support of the Timaru Golf Club was appreciated. “This is something fresh, new and exciting for me and it will allow my family to continue to enjoy South Canterbury.