Lawyer at ease with cricket’s appeal 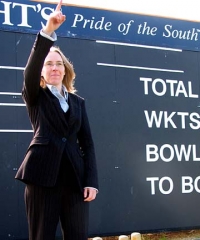 Kim Cotton’s weekend pastime has many similarities to her day job.

During the week she looks to uphold the law of the land, as a solicitor, and on the weekend she upholds the laws of cricket.

The 32-year-old officiated in a senior cricket game in South Canterbury last Saturday, when she stood in the game between Timaru and Waimate, at Ashbury Park.

She is the first female to umpire at the senior level since Amanda Wilson in the 1980s.

Cotton said she had been playing for more than 20 years, adding umpiring to the mix a decade ago.

The former Central Districts under-21 representative said she saw umpiring as a way to stay involved in sport.

“With work, and my career, I’m quite busy, so I don’t have time to commit to a team sport.

“I really enjoy sport and I just wanted to continue my involvement.”

The former all-rounder, who spent a season playing cricket in Kent, said she enjoyed being in control out in the middle, and she was looking forward to doing it regularly.

As for her first game, she said both teams treated her well and she expected it would continue.

“It went reasonably well for the first game of senior men’s cricket.

“They were all very polite and well behaved. Cricket is a gentleman’s game.”

Cotton said it was good to have an experienced umpire like Graham Begg at the other end in her first game.

She was not sure how far she wanted to take her umpiring, but said the opportunity existed to go further up the ranks.

“Ask me at the end of the season.”

She said she still had some training and examinations to do, but there was not much different about umpiring at the senior level.

“It was probably a bit quicker in the speed they play.”

With umpires in short supply in South Canterbury, she will no doubt be a regular addition to Saturday cricket.