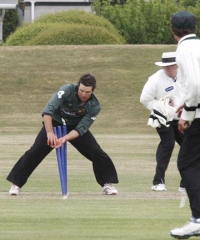 While North Otago were not at full-strength, yesterday’s win gave South Canterbury its third straight warm-up win, and psychological points over their opposition, just a fortnight out from the start of the competition.

Aorangi Park’s pitch offered consistent bounce, and the over-head cloud offered hope to the South Canterbury bowlers, as they were sent into the field, after losing the toss.

North Otago were best out of the blocks though, as their openers, Ben Cant and Jeremiah Shields went about building a total, against the opening bowlers.

Seventy-nine runs were on the board in no time, and Cant had made his 50 from just 55 balls, including nine fours and one six.

However, when he was removed for the same score, and Shields departed for 30, South Canterbury were back in the game.

Former Otago representative Sean Eathorne came and went for a duck, and North Otago were stumbling at 88 for three.

Matt Machan and Mitchell Clarke combined for a 75-run partnership, before they too were dismissed in quick succession.

The loss of the pair triggered a collapse in the visitors, as James Laming nabbed four for 39 and spinner Sam Carlaw backed him up with two wickets, as South Canterbury took the last seven North Otago wickets for 13 runs.

Needing 177 for victory, South Canterbury opener Richie Preston was not about to hang around.

He punished anything short, or wide, as South Canterbury went at better than a run-a-ball for the first 15 overs.

In contrast, Craig Davies was struggling at the other end.

He was dropped twice, and played and missed at the ball on numerous occasions.

Preston was eventually removed for 77 off 62 balls, which included 10 fours and three sixes.

It brought to an end an opening stand of 113.

Davies hung tough and eventually brought up his half century, before he too was dismissed, for 54.

North Otago opening bowler Richard Turner was the best of the bowlers, with two for 26 from 6.4 overs.