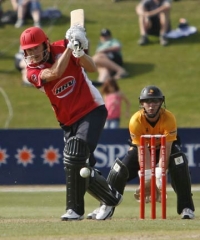 STAR TURN: Rob Nicol's 85 from 43 balls proved crucial in the Canterbury Wizards' five-run win over the Wellington Firebirds in the Twenty20 match at Aorangi Oval.

A career-best 85 from Canterbury opener Rob Nicol was enough for the Wizards to play spoiler to Wellington’s domestic Twenty20 cricket finals hopes, as they held on for a five-run win at Aorangi Oval.

Nicol took full advantage of Wellington captain Grant Elliott’s decision to bowl first. He continued his love affair with the ground, smashing 85 from 43 balls, to follow up his 132 in a one-day game against Otago last year.

The former Aucklander used his feet at will in an innings which looked ugly at times, but had flashes of controlled frenzy. It saw the Wizards go at 10 runs an over for his 64-minute stay at the crease.

He punished anything short, and played the spinners through the onside, employing the slog-sweep often.

He was well supported by Peter Fulton who made 25 and Michael Papps, returning from injury, with 33.

Nicol had brought up his 50 off 32 balls, before he pummelled another 35 runs from his last 11 balls.

Having hit Jeetan Patel for two successive sixes, his attempt for a trifecta saw him trapped leg before wicket.

Wellington medium-pacer Ronald Kuraitiana was impressive, his wicket of Fulton stopped the early momentum, and the three he nabbed at the death limited Canterbury’s charge to 207 for six.

Wright was vicious and no part of the ground was spared in his 29-ball innings. 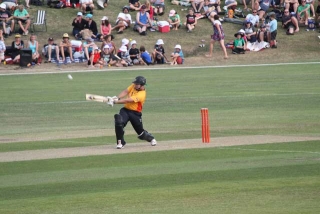 JESSE RYDER pulls another ball into the neighbouring hockey turf during his innings of 59.

Ryder continued his rich vein of domestic form, hitting six fours and three sixes, in a 33-ball innings which saw him lose one cricket ball in the parking lot, in his innings of 59.

The pair cruised at more than 12 runs an over, until Wright perished for 64, looking to clear the rope again from the bowling of Johan van der Wath, in the ninth over. Carl Frauenstein then dragged the game back in Canterbury’s favour, removing Ryder, thanks to a catch from Andrew Ellis at long-off, and then he ran out Elliott, two overs later.

He and Nicol pulled the Wellington run rate back, Nicol bowled four overs for 34, while Frauenstein ended with two for 27 from his four overs.

The game was slipping from Wellington, and much of the work was left to James Franklin.

Wellington needed 54 runs from the last five overs, and when Franklin was caught on the boundary for 36, in the 18th over, the Wizards had regained control.

Firebirds wicketkeeper Chris Nevin and Stewart Rhodes needed 16 off the last over bowled by Ellis, but they could only manage 11, effectively ending Wellington’s chances of a finals spot.