SC U16 start tournament with win 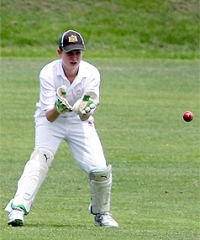 Nick Haack and Glen Drake powered the South Canterbury under-16 team to a 58-run victory over Canterbury Country at Aorangi Oval yesterday.

The home team made a perfect start to the Canterbury Regional tournament in Timaru, despite a middle-order collapse, and wayward start to their bowling effort.

Drake, 16, hit 97 off 88 balls, but his dismissal, after hitting 11 fours and three sixes, saw South Canterbury unravel at the crease. The team had looked strong early, after going at six runs an over for the first 20 overs.

It looked like they would get close to 300, when 250 was considered a par score.

Dan O’Brien and Drake put on 47 runs for the sixth wicket, to stall the collapse, but soft dismissals hurt and they were all out for 222 in the 42nd over.

South Canterbury under-16 coach Richard Davidson had ear-marked the game as an important one to win if his team wanted to make the semifinals, but he did not get much help from his bowlers early, as several loose deliveries were put away to the boundary.

Up stepped Haack, his spell of 5-50 from 10 overs proving good enough to shut down the Canterbury Country batsmen, who were skittled for 166.

Mid Canterbury lost to Canterbury Metro White by two runs, as they were dismissed for 160.