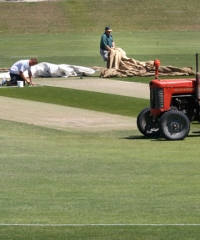 PREPARATION: Brian Ward (dark shirt and Mike Davies make the last minute preparations to the Aorangi Oval pitch ahead of the T20 game against Canterbury and Wellington.

There will be plenty of past, present and future Black Caps players on show as domestic cricket returns to Aorangi Oval at 5pm today.

They include Wellington’s Jesse Ryder, James Franklin and captain Grant Elliott, who will probably line up for the visitors, while the Wizards will have Shanan Stewart and freshly called-up players Rob Nicol, Dean Brownlie and Reece Young.

One man who won’t be in his red and black gear will be injured pace bowler Hamish Bennett.

The former Timaruvian, who was not in the reckoning for either the domestic one-dayer, in Timaru last year, or the T20 clash between the Wizards and Central Stags later in the season, would have spearheaded the Canterbury attack today, but for a groin injury picked up in his debut test for New Zealand last month.

“I’m hoping to be back in the New Year, but I’m trying not to rush back.

“A groin [injury] can be a niggly thing, so I want to make sure it’s right.”

The 23-year-old said his team-mates should be wary of the Firebirds’ spin duo of Jeetan Patel and Luke Woodcock.

The Aorangi Oval pitch is considered a batsman’s track, but can take spin later in a game.

Bennett said with Woodcock showing the kind of form which saw him selected in the World Cup squad, the Wizards best be careful of the danger he posed.

“Luke, in particular, bowled really well against us the last time we played, and he was a real threat.”

The Wizards recorded a three-wicket win over the Firebirds, in the opening round of the competition, at Wellington’s Basin Reserve. They chased down 148 with two balls to spare.

The Firebirds may have the more experienced Black Caps, but Canterbury will be relying on their overseas players to stand up and deliver the difference.

While Van der Wath is still finding his feet, ten Doeschate is the competition’s leading run-scorer with 258 from seven innings.

Nicol is second with 200 runs.

The Wizards’ Richard Sherlock is the top wicket-taker with 11, while Woodcock is second with 10.

The Firebirds kept their slim chances of a finals spot alive with a 43-run win against the second-placed Northern Knights on Tuesday. Ryder hit 86 from 47 balls, in Wellington’s total of 202.

Canterbury have no chance of making the top two after their 12-run loss to the table-topping Auckland Aces, also on Tuesday.

The Aorangi Oval pitch should play true to form. Groundsman Mike Davies said he was pleased with the preparation.

The pitch gushed 781 runs in a 50-over match between the Wizards and Otago Volts last year.